“It gives me great pleasure in appointing Malcolm Nicolson, current NSW branch president, to the position of Lieutenant to the Chief in Australia”

“I take much pleasure in congratulating our president, Mal Nicolson, on his appointment to Chief’s Lieutenant, a position I heartily endorse. To me this shows the spirit of our clan from the Chief to the ordinary member and makes me very proud to be a member of this wonderful, extended family of ours, Clan MacNeacail (MacNicol)” 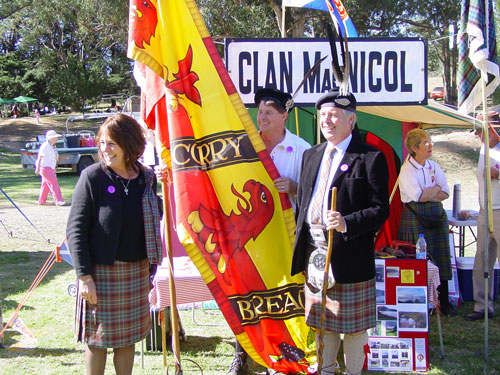 New Chief's Lieutenant Mal Nicolson, with the Chief John MacNeacail of MacNeacail and Scorybreac and Jenni

We are pleased to be able to pass on the good news that the Chief has appointed Mal Nicolson to the position of his Lieutenant.  This is a position recognised by the Court of the Lord Lyon in Scotland.

In countries where the Chief of a clan does not reside, Clan Commissioners are appointed to oversee the running of the clan.  Our clan has Commissioners in North and South New Zealand, USA and even Scotland.

As we have a Chief in residence in Australia, previously Counsellors were appointed to advise him on the happenings in their respective regions.

With John Nicoll now, in his own words, “an OBE” (Over Bloody Eighty), he recently raised again the issue of passing the baton onto someone younger.  Not wishing to accept John’s resignation, the Chief had the excellent idea of consulting the Lyon Clerk and Keeper of the Records in Scotland to ask if it was possible for him to have more than one Lieutenant.  The Lyon Clerk (Elizabeth Roads, Carrick Pursuivant of Arms in Ordinary) confirmed that she could not see a reason why the Chief could not have two Lieutenants.

In selecting Mal, the Chief said, “Mal has worked tirelessly for the Clan at many functions and gatherings over a long period of time.  I look forward to a long and fruitful association with Mal and his family.”

Warmest congratulations are extended to Mal from throughout the Clan.